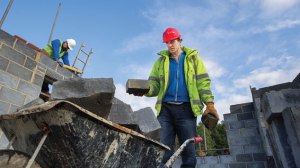 Preliminary figures from the Office for National Statistics (ONS) suggest the UK’s economic recovery may have lost momentum in the third quarter of the year. GDP is estimated to have grown by 0.5% between July and September, compared to growth of 0.7% in the previous quarter. The service sector continued to lead the way, expanding by 0.7%. Construction was a large drag on growth, by 2.2%.

What the commentators said

While these GDP figures prompted “another predictable round of doom-mongering”, said Jim Armitage in the Evening Standard, this is more likely to be a “small bump in the road”. The construction industry is “notoriously volatile” and the numbers “could well end up getting revised upwards anyway” as they often do. Despite the faltering Chinese economy, Britain is recovering slowly from the financial crisis. “Even one of the main problems our exporters face, the strength of the pound, is itself proof of our relative resilience.”

However, the strong pound, coupled with the slowdown of the global economy, “make exporting UK made goods expensive and difficult”, said Larry Elliott in The Guardian. Meanwhile, low interest rates “make borrowing for consumption and speculation in financial assets cheap”. The economy has lapsed back into a pattern where the service sector is strong and manufacturing is weak. “As was the case in the years leading up to the deep recession of 2008-2009, the economy is heavily reliant on the City and consumer spending.”

The good news is that “real GDP is now 6.4% higher than the pre-recession peak in early 2008”, said David Kern, chief economist at the British Chambers of Commerce, quoted in The Guardian. Nonetheless, we need further measures to support the recovery and boost growth, “with particular emphasis on exports and infrastructure investments. Fixing the fundamentals will place the economy on a surer footing”.

Overall, though, this does not look like the start of a “more serious slowdown”, said Capital Economics. There are obstacles to overcome in the coming quarters, including uncertainty over the referendum on leaving the European Union and a renewed fiscal squeeze. Hence growth next year is unlikely to be spectacular. But there is a good chance that it will bounce back in 2017.