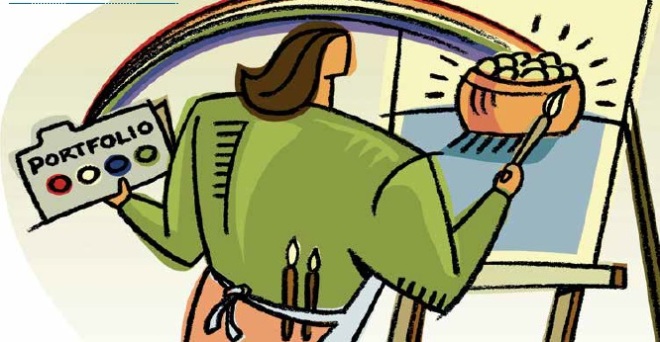 Judging by the increasing amount of gender-specific investor research, the financial services industry has woken up to the realisation that there is an investment gap between men and women.

Campaigns, blogs and advisers are thinking of ways to reach out to women. At first glance, it seems that investment has long been ‘a man’s world’ and is only now, at last, slowly opening up to women. But that is not the full story.

When the UK became ‘a nation of shareholders’ in the early 18th century, women’s portfolios included shares in companies, as well as loans secured on property.

A HISTORY OF FEMALE INVESTORS

Despite being excluded from male business networks, women took advantage of an increasing number of financial newspapers.

By 1840 nearly half of Britain’s public creditors were women, according to professors David Green at King’s College London and Alastair Owens at Queen Mary University, who have noted the importance of women as holders of government bonds in the early 19th century.

The proportion of women shareholders rose from 15 per cent in 1870 to 42 per cent by 1935, according to professors Josephine Maltby at Sheffield University and Janette Rutterford at the Open University.

In 1903 the chairman of Spratt’s Patent, a London-based dog biscuit manufacturer, stated at the firm’s annual general meeting that, out of 1,482 shareholders, there were ‘585 ladies, who were generally investors and who were therefore, as a rule, preferable to those who bought the shares merely as speculation’.

In the US, the American Telephone and Telegraph Corporation proudly announced in 1924 that most of its shareholders were women.

Women have always been involved in the investment industry, says Maltby, but the public discourse has not always reflected that. Instead, two historical discourses have obscured the image of women investors.

The first emerged in the 18th century, when the speculative side of investing was seen as a feminine attribute. Women were thought to be investing on an irrational and emotional whim. After all, Fortune, the fickle goddess who symbolically controls the world of commerce, is a woman.

By the 20th century, this picture of women investors as emotionally driven speculators was replaced by a second perspective: a view of women as cautious investors. Women were seen to have a ‘nesting instinct’ that translated into a natural preference for lower-risk investments.

This view has prevailed ever since, says Maltby. It is best encapsulated by the cliché that the collapse of Lehman Brothers would have never happened if it had been Lehman Sisters.

The main reason for this, it is often said, is that women are more risk-averse than men, and investing is a risky business.

Many studies support this idea. Only 9.3 per cent of women are willing to take financial risks, compared with 20.4 per cent of men, according to TD Direct Investing’s research.

But the belief that women are innately risk-averse may reduce the choices women are being offered by the industry.

In a recent poll, Money Observer’s sister website Interactive Investor found that 63 per cent of women think investing is risky, compared with 55 per cent of men. But here is a crucial point: once those women began investing, their behaviour was similar to that of men.

Looking beyond statistics, we put the question of whether women are risk-averse to a number of financial advisers:

More recently, many previous academic studies that attested to women’s risk-aversion have been questioned. Many of these were carried out on US graduate students and didn’t correspond to real-life situations.

Instead of assuming that women are innately risk-averse, it is important to consider the wider context of women’s lives, their earnings and career paths.

In the UK there is a gender pay gap of about 10 per cent, based on median earnings for full-time employees, according to the Office for National Statistics.

In addition, women are much more likely to take time off work to rear children and care for their parents and parents-in-law. Considering these social and economic factors, it is no surprise that women are more likely to choose low-risk options.

But it is crucial to remember that women are not a homogenous group. There are differences between single and married women in their attitudes to investing, and between those who have children and those who don’t. These factors may matter more than gender.

Hazel Muir, 48, is a science writer from Tunbridge Wells. She has savings in fixed-rate Isas, National Savings Certificates, savings accounts and peer-to-peer lending accounts at RateSetter and Zopa.

‘I do my own research on interest rates and risks,’ she says. ‘I grew up in the Scottish Highlands at a time when there was a relatively recent history of austerity – it was ingrained in me that you should be fearful about not having any money.

‘Maxing out a credit card on a new kitchen is really not my thing. To me it’s an issue of putting your eggs in lots of baskets – it’s worth taking a few risks to get high interest rates providing you understand the risks.

‘However, I don’t invest in stocks and shares, because even if I read boring company reports, I still wouldn’t be sure I genuinely knew what the companies were getting up to.’

‘WOMEN KNOW MORE THAN THEY THINK’

When trying to explain why women don’t invest, the issue of jargon is often mentioned. Fintech company Instinct Studios found that ‘women are more likely than men to read fund information in detail, but they are less likely to say they fully understand it’.

But rather than concluding that women understand less than men, bear in mind that women may be more likely to admit they don’t understanding something than men.

‘Women know far more than they think they know,’ says financial adviser Anna Sofat. ‘They have the desire to know the ins and outs, which makes them focus on what they don’t know rather than what they do.’

Jon French at AW Financial Management says: ‘The jargon is probably off-putting to anyone who isn’t educated in such matters, regardless of their sex.’

One common supposition that does seem to hold true is that women place greater importance on ethical and socially responsible investing than men do.

In 2014, ‘The Power of the Purse’ report published by the Centre for Talent Innovation revealed that 76 per cent of women in the US wanted to invest in organisations that promoted social wellbeing, compared with 60 per cent of men.

In the UK, the equivalent figures were 82 per cent of women compared with 73 per cent of men.

Advisers echo these findings. Andrea Turner Moffitt, author of the report, explains that women strive to have a ‘richer sense of meaning and purpose and what they’re doing in the world’ through their investments.

She found that one priority among women was to invest in other women’s businesses and help female entrepreneurs. Sofat adds that women are also more likely to ask questions such as: What is the business owner doing about child labour?

So what can be done to get women more involved? First, the information that companies provide needs to be more easily accessible.

Lisa Hardman, director at Investing Ethically, says: ‘Finance needs to be demystified and we need some serious jargon-busting.

‘It doesn’t help that lots of investment funds have all sorts of weird and meaningless names such as Voyager Diversified or Foundation, and that a lot of the documents in financial services are exceedingly long and impenetrable.’

Also, the industry needs to be more inclusive. ‘The typical financial adviser is in their 50s and male. In certain situations women relate better to a female adviser,’ says Nicola Meadows, financial adviser at Hargreaves Lansdown.

The industry’s leadership needs to be more diverse, says Turner Moffitt, for women to take part. ‘We also need to get into schools and colleges to talk about money and finance so that we change perceptions of the finance industry,’ says Hardman.

If we change the discourse and perceptions around investing, women might become keen investors once again.

This article was originally published in Money Observer on 6. April 2016: http://www.moneyobserver.com/our-analysis/how-can-we-get-more-women-investing